I’ve witnessed it so many times that I’ve given it a name — The Pendulum Learning Curve. 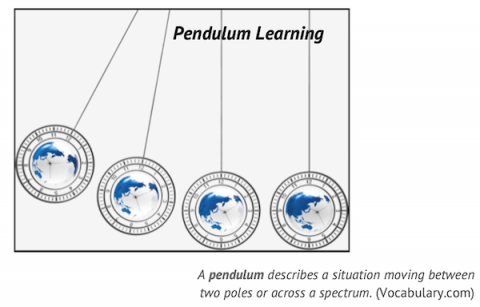 The most common pendulum pattern I’ve seen is around anger, especially in people who are “spiritual.” They often say, “I’m not an angry person; I want to keep the peace so I’ll just hold it in and won’t say anything about it; it’ll pass,” or something like that.

If that sounds familiar to you, you know that it doesn’t solve the problem, doesn’t help the relationship with the person who made you angry, and you end up carrying growing resentment.

The desire to preserve your connection with that person prevents you from expressing your anger because you don’t want to harm that relationship. It’s understandable, but it doesn’t work. Because, chances are, whatever happened will happen again, and the accumulation of your hurt and anger will grow.

Holding it in and not saying anything would be at the end of the pendulum swing we’ll call “under-expressing” anger. Avoidance doesn’t solve the problem.

This is most often seen with people who are one of the withdrawn types, Type Four (The Individualist), Five (The Observer) or Nine (The Peacemaker) or those with a high red score for Four, Five or Nine in their chart (you can see your scores by taking the EQ quiz at EQQuiz.com).

Eventually, you can’t contain it anymore and you may lash out, either at the person who made you angry or even worse, at someone who had nothing to do with it. Oftentimes it’s with those we are closest to and love the most.

The other end of the pendulum swing is “over-expressing” your anger. This is most often seen in the more assertive types, Types Three (The Achiever), Seven (The Enthusiast) and Eight (The Challenger), or those with a high red score for Three, Seven or Eight in their chart. This is also ineffective.

It does not invite curiosity, a solution, or a conversation to promote understanding. They may dig their heels in and hold onto their stance unwilling or unable to listen to the other’s perspective. It has the result of pushing people away, even unintentionally. And it doesn’t resolve the conflict, there is no new insight or understanding, so chances are, it’ll happen again.

If you want to talk about where you are on your “pendulum learning curve,” click here to schedule a call with me.

See more in the next blog!